skip to main | skip to sidebar

Anarky in the USA?

One of the weirder characters in the Batman saga was introduced in Detective #608. Anarky is played as something of an anti-hero. On the one hand, he opposes injustice; on the other, his methods are extreme:

The character getting zapped there is rock star and drug pusher "Johnny Vomit". Of course, the template for JV is Johnny Rotten, the Sex Pistols' lead singer; the Sex Pistols first big hit was Anarchy in the UK.

Anarky gets his inspiration from letters to the editor of the Gotham Gazette. A woman writes about the pollution in the Gotham River, and Anarky takes things (including a chemical magnate's head) into his own hands: 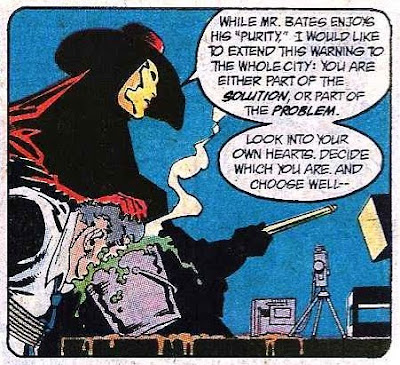 The chemical magnate was found "dying" (we're not told if he actually died) along with the tape of Anarky addressing the citizens of Gotham. In the story, we are introduced to the Marcin family: Mike, his son Lonnie and "Mom". From the context it is clear that one of them will turn out to be Anarky. But get Alfred's reaction to Anarky: 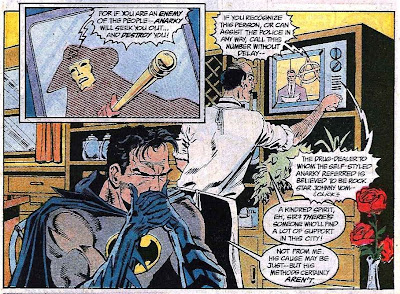 A "kindred spirit"? "Someone who will find a lot of support"? Yeesh, the Alan Grant run was suffused with a lot of this moral relativism, which just plain doesn't work with Batman.

In the next day's paper, there's a letter complaining about a bank building being constructed on city-owned land, "when what's needed are houses for the homeless living there." A couple of homeless Vietnam vets are there to protest, and Bruce comments: 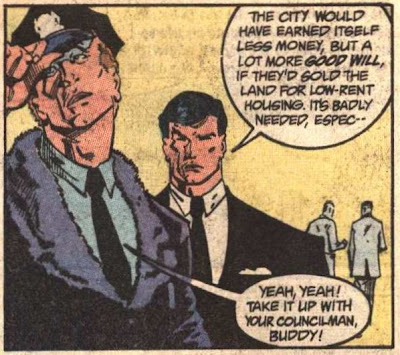 You know, it's a shame there wasn't some millionaire philanthropist handy to buy the land and construct the low-rent housing. Later that evening, Anarky breaks into the construction site and begins destroying property, aided by the homeless vets: 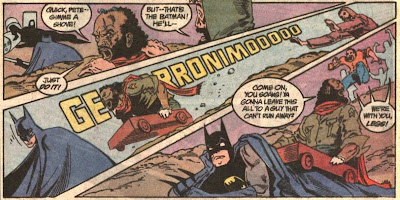 "Legs" popped up in several stories around this time. Anarky escapes but Batman is hot on his tail as he enters the Gotham Insurance Company building. It appears that Mike Marcin (the father) is Anarky, but: 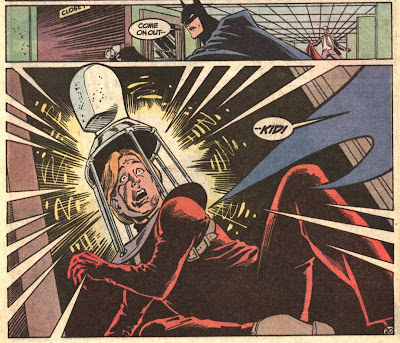 And later, we get some moral relativism from Batman and Commissioner Gordon: 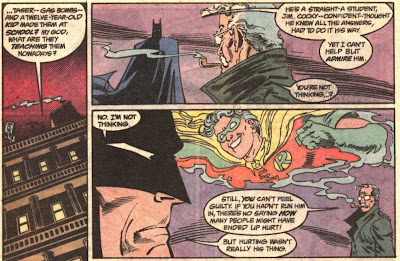 It goes on for another couple more panels like that. BTW, this was in the era after Jason Todd's death and before Tim Drake became the third Robin, which explains the musing about whether Lonnie could be another Robin.

Anarky returned in Detective #620. Tim has started his training, and is trying to find out who's stealing millions with a computer. He gets a big clue here: 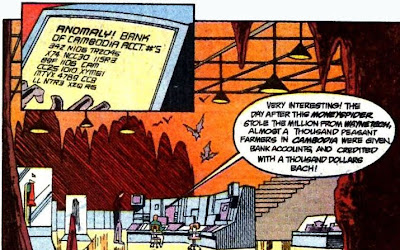 Tim tracks the activity down to Gotham's Juvenile Hall, where he confronts Lonnie. Once again, we get the sob sister routine: 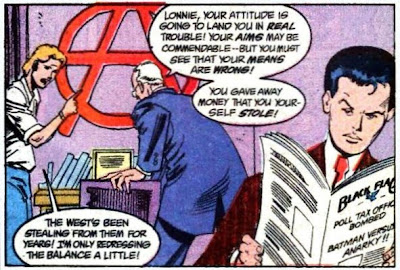 Despite the name, Anarky sounds significantly more like a cardboard communist: 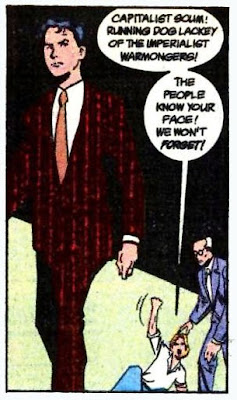 Anarky has reappeared a dozen or more times in the 20 years since his debut. He had a pair of miniseries in 1997 and 1999; I read one of them but found it boring and overly philosophical. According to the DC Comics Encyclopedia, in a later story it was revealed that Lonnie was adopted by the Marcins and is actually the illegitimate son of the Joker.
Posted by Pat at 10:55 AM