August 04, 2020
This is something I hadn't noticed before, but while I was going through the Batman issues in order it popped right out at me. In the early days, Batman had a pretty cavalier attitude about carjacking.  It started (as best I can find) in Batman #6: 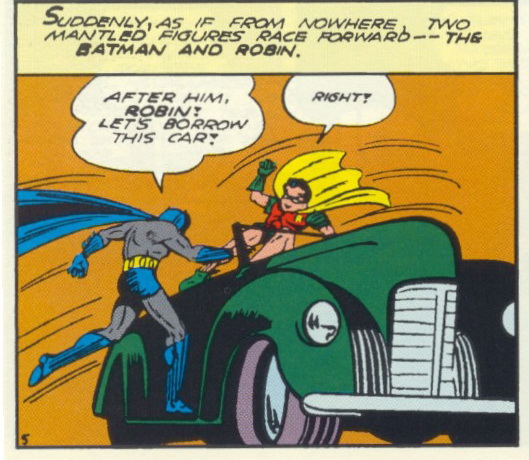 Now as it happens, they are after a hoodlum who has just run down a little girl, so you can argue it's justified. In the next issue they chase after the Joker: Don't look a stolen car in the carburetor, Batman.  It gets worse in this story as Batman and Robin bail out of the vehicle while it is speeding, presumably allowing it to crash.
Now keep in mind, that Batman was transitioning at this point, from operating completely outside the law, to being a trusted friend of law enforcement.In fact, it was this issue (Batman #7) that featured the scene with Commissioner Gordon announcing that the GCPD would cooperate with Batman.
So it's not hard to imagine that the editors might have wanted Batman ix-nay with the ar-cay eft-thay, especially since in these two particular cases there was no good reason the Batmobile couldn't have been nearby.
But the writers apparently had different ideas.  In Batman #9, he and Robin appropriated a couple motorcycles and did not return them in like new condition: 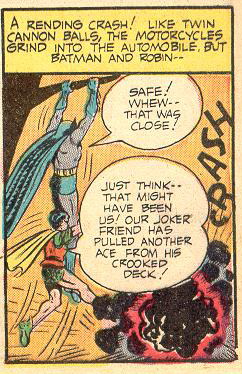 ,
The next time Batman borrowed a car, he got permission from the DA'S office: 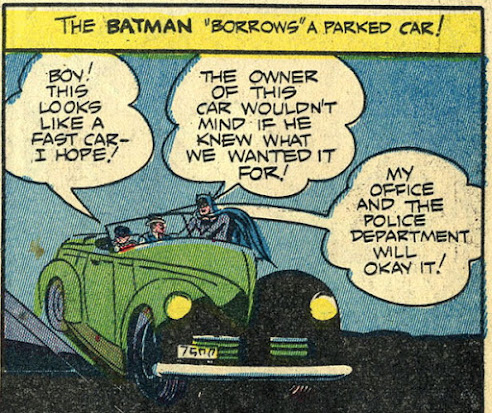 When did Batman given up grand theft auto?  Well, he may have decided it was too risky after an incident in Batman #17. A criminal named the Conjurer has kidnapped Batman's biographer, an old codger who has made a hobby out of chronicling Batman's career. Why would anybody--oh, wait!
The old man is forced to come up with a death trap that will work on Batman, and he remembers the Caped Crusader's unfortunate tendency to take any nearby vehicle out for a test drive: 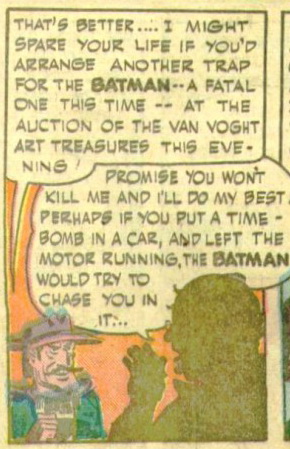 Don't worry, Batman's biographer did not betray him; he bravely jumped into the rigged car and forced the Conjurer off the road, helping Batman make the collar.  Let's hear it for Batman biographers! 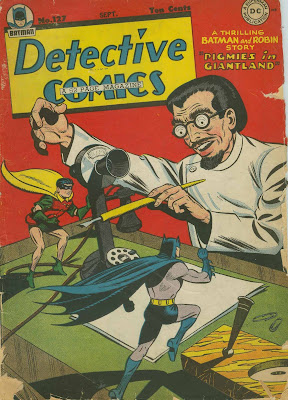 After Batman closed up Wayne Manor in the late 1960s and started operating out of the Wayne Foundation Building, Batman artists came up with a distinctive appearance for the latter: The tree inside the building functioned as an "establishing shot".  In TV and movies, directors often use an establishing shot to tell viewers where the particular scene is taking place.  Anyway, variations on that panel appeared hundreds of times in the Batman comics over the years, starting in the late 1970s. But here's something I had forgotten: the tree is fake, as mentioned in Batman #306 (December 1978): I'm not sure how fitting it is to have a fake metal tree stand for life.  Inside that thick metal shaft is the elevator for the building. 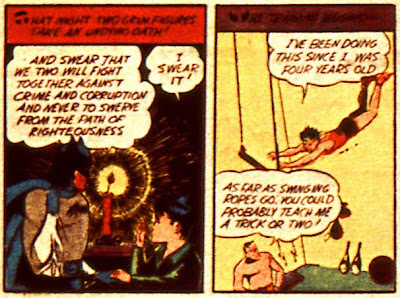